There is a reason why people act the way they do – and it’s often because of the stars they’re ruled by.

All the star signs have their unique characteristics, so it’s no surprise that they are all different when it comes to relationships.

How do you know if a certain zodiac sign likes you?

Read on to learn about the most common characteristics and behavior patterns of each zodiac sign – and find out whether they like you!

Expect a lot of hugs, even if you barely know the guy! Expect this man to challenge you, whether it’s your beliefs or simply him enjoying winning a game with you.

The Aries man can get quite jealous so watch out for those signs early on. He struggles to see you giving attention to other men – and wants to make sure you see his worth.

He’ll show a lot of interest in your life – so you might not notice he’s got a crush on you at all (especially if he’s your best friend). This will likely frustrate him, as in his eyes, he’s giving you plenty of signs of his interest.

He will likely pay close attention to what’s going on in your life, who you’re hanging out with, and what you enjoy doing. Eventually, he will just tell you how he feels and asks if you feel the same way.

Once in love, there will be no dull moment in this man’s company. His energetic, adventurous, and fiery. He loves a woman who knows her worth and has high standards. He wants to know that a high-quality woman chose him.

He’ll take you to fancy dinners and great holidays and share every part of his life with you. Check out these 15 Sexy Aries Celeb Men to see more!

The Taurus man will first show his interest in you by asking your opinion on various topics. He loves stimulating conversations, so what better way to get to know the woman he’s crushing on?

Since he tends to be quite traditional and a bit of a homebody, he might not invite you on a date night out – but will gladly cook a three-course meal for you at his place.

His home is his fortress and that’s where he feels the most at ease; seeing you at his place will give him the confidence to admit he’s got feelings for you and wants to date you. Until then, he might just prefer to play it safe.

The Taurus will simply adore you – and all your quirks and bad habits will be super cute in his eyes. He wants to date someone special and unique.

Another sign a Taurus man has got his eyes on you is if he teases you. He’ll love to poke some good-natured fun at you – and you can trust that when he does that, he’s smitten. You’ve taken over his thoughts, and he’d gladly spend all his free time with you and only you.

He will compliment you a lot, but be careful – all earth signs can be a little manipulative. He might be hinting at who he wants you to be, all disguised in a clever compliment.

Witty and talkative, this man might seem like the heart of any party – but it’s especially true when he’s got his eyes on you. The Gemini man becomes a total weirdo when talking to someone he likes, which can be quite cute.

He lets his guard down and treats you as a friend straight away. He doesn’t want to be obvious about his crush, but you should expect him to be a little touchy. He will pay attention to what you’ve got to say and encourage you to speak more.

Be careful with this man, as he seeks adventure in everything – including love and dating. Sometimes he can be in it for the experience and the thrill of it, but not be emotionally available.

This man is a true gentleman, so trust that he’ll always treat you well, no matter who’s watching. If you are in it for the ride, show him that you mean business.

The sweet and shy Cancer man really wants to show you his adoration, but it doesn’t come that naturally to him. While all of his friends will be 100% convinced that he likes you, he won’t be too obvious about it.

You can always tell, though; all it takes is observing how his friends act around you. They will smile a lot and try to make sure you notice him. They’ll be the ultimate wingmen.

Once on your radar, the Cancer man will find a subtle way to win you over. However, he fears rejection – and he needs to be sure that you’re a good match before he proceeds.

Sometimes you might just have to make the first move and show him that you want to get to know him too – which will give him the confidence to open up to you.

He’s probably the most touchy-feely of all the zodiacs and would play footsies under the table. He might say some weird or awkward things because he’s nervous – so be patient with him and let him relax in your presence.

He’s extremely protective and can be a little possessive. As long as you find it cute, he will do anything he can to impress you. He wants you to see how great he is and how great the two of you can be together.

The Virgo man is all about the challenge, but not in the same way as the Aries. He tends to display his negative qualities first to test you. He might tell you about bad things he’s done just to see if you are worth his time.

He tends to be very insecure, so he simply tries to protect himself from rejection early on. He might also pick out your flaws – but only because he wants to support you in being the best version of yourself.

A sure-fire sign that a Virgo man likes you as more than a friend is that he will open up to you a bit more than he would with others. He will stick around and try to get to know you.

He appreciates intellectual stimulation, so embrace his prompting questions.

When it comes to the Libra man, it can be tough to find signs. In general, he’s charming and likable – and he’s popular with a wide range of women.

One certain way to tell he likes you is to simply ask. He would never say that he doesn’t like you if he does; he’s too honest to be playing games about this.

Another obvious sign is his desire to be around you frequently. He will treat you differently than how he treats others. He’ll use a softer voice and more loving eyes with you. He wants you to know that you’re special – even if he doesn’t yet know if this is going to be something serious.

When the Scorpio man gives you special attention, you know he means business. He certainly isn’t attracted to most women. In fact, he can be extremely indifferent to most people if they aren’t of any interest to him.

You’ll know he’s interested if he gets a little bit awkward around you. This man is charismatic, charming, intelligent, and witty (just like these sexy famous Scorpio celebs!) – so when he acts out of character, it’s because he’s got a little crush.

It’s adorable to behold! Expect intense eye contact from him and a lot of “subtle” staring. He can be extremely protective of his crush – almost possessive – so make sure he knows your boundaries.

The Sagittarius man will try extra hard to make you laugh, just to test the waters. If you respond positively to him, he’ll keep being a little childish, trying to win you over.

He sees adventure in everything – including in getting the attention of his crush. He’ll do anything to impress you with random skills or facts.

One sign he’s got his eyes on you is that he’ll stutter or act a bit shy in your presence.

He’s all about compliments, questions, and getting to know you fast. He’ll try being who he thinks you want him to be, so be careful. Make sure you know the real man behind the star sign.

A clear sign that you are special in the eyes of a Capricorn man is that he’ll go from being outrageously flirty one day to coy another. He tends to overthink things and is unsure about how to act in the presence of his crush.

With a strong superiority complex, this man doesn’t want to reveal his cards too soon or show up to be too smitten. He’s afraid of getting hurt – so he’ll do anything to protect his feelings for as long as possible.

The Capricorn man would love to give you advice and offer support. All you have to do is ask! Similar to Scorpio, the Capricorn seriously thinks that he can seduce you with his eyes only. Expect a lot of intense eye contact!

A word of warning – this man will never forget a thing you say or do, so be careful!

This man loves to hang around you and get to know you. Like Gemini, another air sign, he’ll encourage you to go after what you want and to live your best life.

He won’t let the conversation die – so if he keeps you texting until late at night, you know he’s really interested.

Expect to have a lot of laughter in the company of the Aquarius man and expect him to stare at you a lot. He won’t really care what others might say; he’s in it for the prize, and that’s you!

A combination of coy and giggly, the Pisces man is the ultimate dreamer – and he’ll make sure that he shares all his dreams and desires with you. When he’s got a crush, he acts awkward around them, which is incredibly adorable.

He wants to look his best for you, so he’ll always make an extra effort. He seems to always be in a flirty mood, even when he’s a little shy.

He loves to flirt through technology, and will likely “stalk you” on social media. He’s all about texting and keeping the conversation going.

As he tends to be emotionally sensitive, one way for the single Pisces man to pine for attention is by saying things like “nobody likes me”, or “I’m going to be forever alone”, in hopes that you disagree with him and show your interest.

He will do anything for you to admit that you find him cute, even if that thing is a little silly.

The different zodiacs all show their interest in different ways – and it could be quite fascinating! A person’s zodiac sign can reveal a lot about them, including: 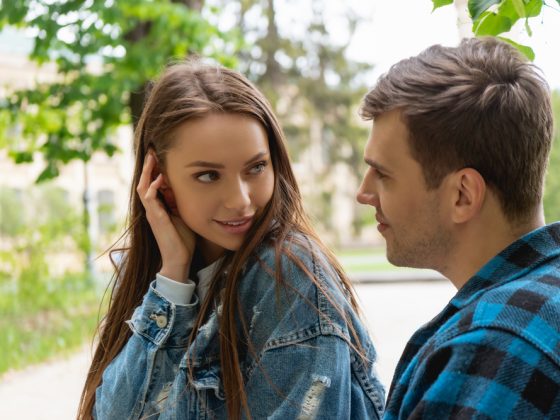 Why Are Capricorns Attracted to Geminis? 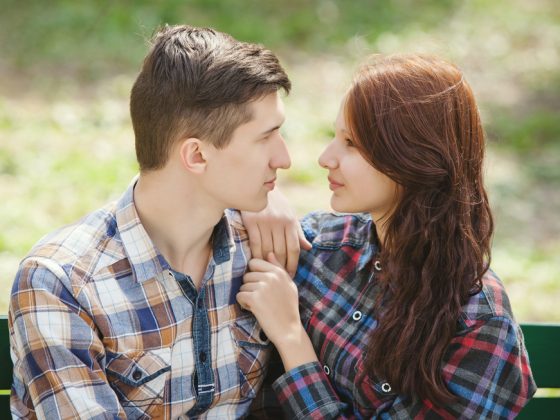 Are Gemini and Scorpio Soulmates? 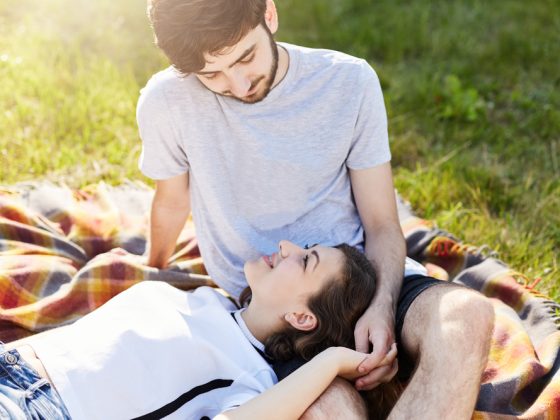 Are Gemini and Cancer a Good Match? 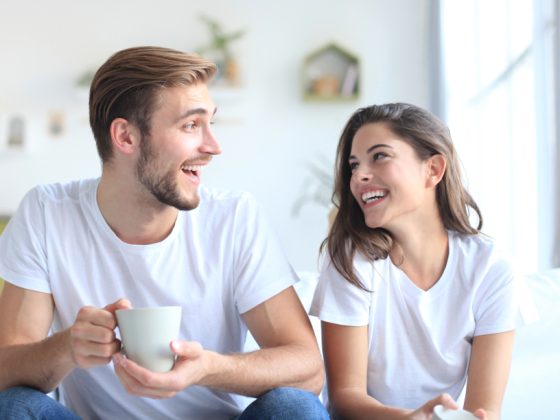 What Turns on a Gemini Man?