Born under the final sign of the zodiac, the Pisces man is a total dreamboat: a water sign, who’s a mixture of charm, romance, intelligence, and flexibility. He’s also known as the most emotional star sign.

The Pisces man in a nutshell

Pisces are born between February 20 and March 20. Not only are the Pisces men a bit mysterious, but they are also largely misunderstood. Due to the stereotypes, he’s seen as overly sensitive and emotional.

Of the three water signs (Scorpio, Cancer, and Pisces) Pisces (the fish) dive the deepest – both spiritually and emotionally. They are seekers of knowledge, purpose, and beliefs.

The truth is, this star sign is able to see a lot; he’s almost got psychic abilities. Some of their positive traits include being:

Some of their negative characteristics include being:

Pisces is ruled by the planets Neptune and Jupiter. Jupiter is the largest planet in our system, while Neptune is the furthest planet from the sun. Combined, these two planets manifest themselves in the Pisces man and provide his rather unusual psychic ability.

The celestial bodies cause the Pisces man to fall deep in thought and surf between fantasy and reality. This is also what causes Pisces to drift off and daydream. This is how he loses his focus and tends to be perceived as a lazy person who loves to procrastinate.

As a result, Pisces needs a partner who can pull him back to reality and help him focus on the present moment. We will later take a look at who his perfect matches are.

The Pisces man in love

If this man is in love with you, expect him to give his entire self to you. His ultimate aim is to achieve harmony in his relationship, almost to merge with his partner’s soul. The start of a relationship with a Pisces man is, therefore, completely intoxicating and can even be overwhelming.

He will do anything in his power to spend all his waking moments with you. He won’t be able to get enough of you. As a result, if you’re not careful, you will likely find yourself abandoning everything else you enjoyed doing prior to meeting him, including friends, studies, and hobbies.

A relationship with a Pisces man gets serious pretty quickly because he doesn’t wait around. He is all in! If there’s a disparity in the feelings between you two, then he will end up getting really hurt. He will blame himself for any rejection and feel self-pity.

What he desires the most of you is for you to forget that there is a world outside of the relationship and give yourself to him completely.

If you’ve got your eyes on this man, it helps to know who exactly he is. So, let’s take a look at the Pisces man’s eight personality traits and characteristics.

When this man feels overwhelmed, he will often withdraw to rest and recuperate. He needs time to sort his thoughts out and only then can he be at peace.

That’s why he often seems focused on something else or worried and agitated. It usually has nothing to do with the current situation, but something he’s dealing with in his head.

The best thing you can do for this man is to respect his “me time” and give him the space he needs.

His sensitivity often makes him want to escape everyday reality. It’s one of the reasons many Pisces men are prone to drug and alcohol addictions. A Pisces man often ignores thinking about his own mortality and just seeks escapism.

He needs someone in his life to remind him that he needs to take good care of himself and pull him back to reality.

The Pisces man is often drawn towards the creative arts, seeking to express his emotional side and imaginative mind by working in fields like writing, photography, painting, music, or the film industry.

Because he hates being controlled, you’ll rarely find him working a 9 to 5 job. He’s just not made for that kind of structure.

4. Easy to love, difficult to understand

The Pisces man can be a real challenge to his partner, no matter how much she loves him. He can be really mysterious and introverted, plagued by all-consuming melancholy and feelings of self-pity and confusion.

Still, this dreamy guy is worth your love, time, and patience. You can truly nurture an amazing relationship with him.

Compassionate and friendly, the Pisces man loves social gatherings, being around people, discussing various topics, and sharing adventures with like-minded people. They hate sticking to routines.

Another typical trait of the Pisces man is that he often prefers to work with friends and start business ideas within his closest circle. He likes being in that comfort zone and sees nothing wrong with it.

He often mixes work with personal life and finds it hard to separate the two.

It’s highly likely that if you date a Pisces man, he will be a lot more romantic than you. Make sure you show him your appreciation, especially when he puts in the effort to sweep you off your feet or surprise you.

When the Pisces man shakes off his laziness, he’s one of the most ambitious and hard-working individuals. He wants the best in life and to be a good provider for his partner. However, he’s not the best when it comes to money decisions, long-term financial planning, or decision-making.

He tends to jump from one entrepreneurial idea to another and does so pretty quickly. He often seeks a shortcut to success and gets easily disheartened when he realizes it doesn’t exist.

The Pisces man is easily impressionable, and as a result, seeks to surround himself with strong-minded and practical people. He admires people who are pushing hard to realize their potential and sees them as role models.

He is often inspired by the achievements of others and gains confidence from surrounding himself with successful people. The downside of this is Pisces’s tendency to fall into a pit of self-pity.

If he feels that everyone else is succeeding while he’s being left behind, he can’t help but blame himself and feel like a failure.

This man wears his heart on his sleeve, there’s no doubt about that. You literally won’t need to guess what he’s thinking or feeling. It can be a blessing and a curse – both in the relationship and in other social situations.

When a Pisces man falls in love, he will just tell you straight away. And when he’s upset with you, he might actually burst out crying. This man is at his best and happiest when everyone else is happy.

He also likes to help people and strongly empathizes with others’ woes. He hates injustice and wants to do everything in his power to help.

The Pisces man: home and family

The man’s home is his magical realm. It’s where he goes to find escape and seclusion. This man is also strongly attracted to animals and plants, so you’ll often find him having a pet, or surrounding himself with aquariums, orchids, or artwork.

His home has a sort of sacred atmosphere, which is incredibly welcoming. You’ll feel instantly at home in his place.

Once he commits to his partner, that’s it – he’s made his choice and he won’t stray. The Pisces man makes a great husband and father because his heart is truly in it.

Now that you know the key traits and characteristics of a Pisces man, let’s see who he’s most compatible with. Pisces is a great match with:

His medium compatibility is with:

His low compatibility is with:

Here is what his relationship with those top star signs can look like:

These two are perfectly suited for domestic bliss, sharing creativity, sensuality, and enthusiasm for conversations on all sorts of intellectual topics. Taureans are practical, earthy signs who provide the Pisces with the grounding they desperately need.

In return, the Pisces’ gentle nature helps Taurus relax and embrace their romantic side. Together, they enjoy sharing and building a home, hosting friends and family, and cooking. They balance each other in all the right ways.

These two signs share a lot in common. To start with, they are both highly empathetic, so they understand each other a lot. They are nurturers who are compassionate and seek that in each other.

Whenever Pisces feels like he’s carrying the weight of the world on his shoulders, Cancer can lighten that emotional load and show him that he isn’t alone. They both love making meaningful connections and are hospitable and generous, with a wide range of friends and close familial relationships.

They instantly make people feel at home when they come over. Their shared kindness and generosity mean that they understand each other almost without words. This pairing is destined to be a success.

Both highly spiritual and in line with their inner world, these two will instantly connect on a deeper level and understand each other’s emotional worlds. They instantly recognize in each other a fellow sensitive soul and know what the other needs to feel understood, loved, and cared for.

They feel safe expressing their feelings because the other simply gets it. They value emotional honesty and can build a relationship that’s based on unconditional love and vulnerability. These two can be together for life because they have a strong foundation in friendship, too.

Last but not least, the Pisces man is well paired with a Capricorn woman, despite their very different habits. These two may at first appear to be total opposites, but somehow, they click.

When they come together, they complement each other in a unique way. The Pisces is a rebellious dreamer, while the Capricorn tends to conform. They bring out the best in each other and share a desire for exploring new places, cultures, and ideas.

These two can grow and learn together and keep discovering and admiring each other’s differences, which only bring them closer.

This man likes to move quickly once he meets the right partner. He also gets attached quickly, so make sure you are on the same page. He can hardly think about anything or anyone else once he falls in love.

Just a warning: this man never sees a breakup coming. Make sure you stay open about your feelings and intentions and how serious this relationship is to you so you don’t lead him on.

Because a Pisces man usually runs around doing favors for everyone, it’s important not to take advantage of his kindness. Show your appreciation and remind him to take care of himself too, not just others.

Help and reassure him when he’s struggling and feeling hurt. Learn to spot the signs when he is feeling down and insecure about his abilities. If he’s feeling negative, remind him of all the great things he’s got, and bring some positive perspective into his life.

Still up for trying to date and love a Pisces man? This man can be a total dream, but also a huge challenge if you’re not ready for it. Now you a more prepared and aware of his traits and characteristics so you can embark on this new adventure. The Pisces Man: Here’s Everything You Need to Know 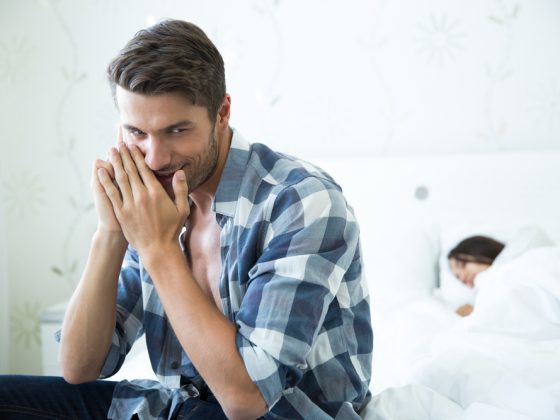 10 Signs a Pisces Man Might Be Cheating on You